This page is a tutorial meant to explain the subset of the core Linux networking toolset which is relevant to the rest of the Jool tutorials.

The thing about Linux is that it comes in many different flavors, and I really have better things to do than explain how to set up a network in each of them. Therefore, Jool’s documentation simplifies things by reaching for the lowest common denominator: The ip command. Throughout the runs, I will provide you the intended address and routing configuration in ip syntax. From this tutorial, you will learn what to extract out of these commands. If you can input them verbatim, great. If you want to translate them into your specific network manager’s speak, that’s yor job.

To be perfectly honest, I don’t actually expect you to follow this tutorial; I only hope that you read and understand it. I’ve found network managers tend to make horrible habits out of undoing your tweaks under your nose, or shutting down without properly cleaning up their network configurations. Also, I realize expecting people to happen to have more than one computer at hand might sometimes be a stretch. If you have experience with minimalist virtual machines, go nuts. Otherwise just stare at the pictures; ip isn’t really hard to understand.

To follow along, you’re expected to know what IP addresses are, and how they are aggregated into prefixes (ie. networks). You don’t need to have experience with command-line terminals beyond knowing how to start one, and type letters in it. However, most of the commands will require administrative privileges, so please also be aware of su/sudo. You also need to know the purpose of the ping command.

Suppose you have two laptops running Linux. We intend to connect them by an Ethernet cable: 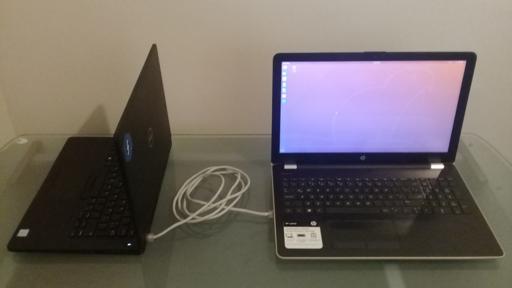 Here’s an abstract representation of everything that’s important in the picture above:

Fire up a terminal in either laptop and run ip address show. Assuming there is no network manager, or it has been terminated cleanly, your output should resemble the following:

This is the minimalistic newbie-friendly state of nil. The Ethernet interfaces are perfectly unconfigured and temporarily dead. There is absolutely no networking going on, and nothing modifying the interfaces in the background. We have complete control.

To have a basic working network, we need to do two things to the relevant network interfaces:

<action> is either up or down, depending on whether you want to enable or disable the interface. (Respectively.)

Then do B’s equivalent counterpart:

It works! That’s that.

The next logical step is to connect two different networks:

Again, you can see the configuration via ip address show:

For now, these pretty much behave just like link-scoped addresses. Everyone can reach others with whom they share a network, but no one else:

To communicate nodes from different networks, we need routing.

Routing is the art of telling your nodes where your packets need to be headed so they can reach other networks.

As you can see, just by adding addresses to each node, they automatically infer routes to their own networks thanks to the prefix length entered during ip address add. We’re now going to add the networks that each node is missing.

The ip route add command has the following form:

“ip route add A via B” means “If you need something delivered to A, send it to B, and it’ll know that to do.”

If you mess something up, you can delete a route you previously created with ip route delete:

In principle, that should be all you need. There’s one additional quirk you need to take care of, however: In order for one of A’s packets to reach C, they need to pass through B first. Thing is, B won’t forward packets unless it’s explicitly told to do so:

That “upgrades” laptop B into a router:

And that’s it. I mean there’s a lot more to ip, but this is all that’s relevant to Jool’s tutorials.

For the sake of visualization, here’s a third scenario involving more routers. The commands shown would allow everyone to ping everyone: